At my PC repair website WehoComputerRepair.com I warn my clients about Best Buy. Beware Best Buy's "Geek Squad." They fix your computer! They come to your house! They spy on you!  These folks are a division of Best Buy and they have been giving their corporate parent quite a legal workout.  I also find the name insulting.  Why do computer repair places have to refer to their employees as "geeks" "nerds" or worse!  Apparently anyone smart enough to fix a computer must be some kind of Autistic mess.  About all they are good for is dumping old equipment that needs recycling.

Think twice before you hand your computer over to them so that Senior Stickyfingers can check you out.  People put their entire lives on their computers now. When you let a stranger fix yours you are probably exposing passwords, financial information, personal data and more.

So what are the Geek Squads crimes? 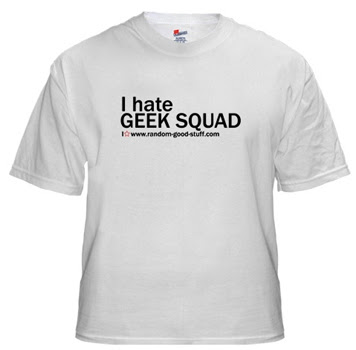 Geek Squad technicians have been caught on numerous occasions searching for and copying pornographic content stored on their customers' computers without permission. When asked about the incident at an unrelated conference, Geek Squad founder Robert Stephens refused to discuss the topic, instead focused on whether bloggers should be considered true journalists and whether bloggers follow the same ethical standards as journalists.  At least one former Geek Squad employee had come forward with allegations that the practice of surreptitiously searching for pornography on their customers' computers is not restricted to isolated employees, but is often shared with management at the location where the one employee worked. In 2013, Geek Squad was sued for invasion of privacy and several other civil infractions for allegedly releasing nude images found on a customer's computer. The suit is ongoing as of 2015.

In 2006 Geek Squad was sued for allegedly using pirated copies of Winternals' Emergency Repair Disk Commander. The lawsuit filed by Austin-based Winternals claims that employees of Geek Squad have continued using the pirated versions of the software after the commercial licensing agreement broke off. Best Buy and Geek Squad were accused of copyright infringement, circumvention of copyright infringement systems, and misappropriation of trade secrets. A settlement was eventually reached, and Winternals created a three-year agreement in place with Best Buy, allowing Geek Squad employees to lawfully use their licensed programs.

In 2002 during a spate of legal threats and challenges to competitors with "geek" in their names Geek Squad attempted to block the trademark registration of New England area competitor Geek Housecalls claiming that it violated their trademarks. When Geek Housecalls refused to budge, Geek Squad filed civil suit. After two years of wrangling, Geek Squad and Geek Housecalls arrived at an out-of-court settlement, the details of which cannot be disclosed according to the terms of the settlement except to state that Geek Housecalls retained its name.  In 2010, Best Buy issued a trademark infringement cease and desist letter against a priest in Wisconsin for painting "God Squad" on his car.

You can see more info like this at WehoComputerRepair.com. For more on Geek Squad just click here.
DON'T  BELIEVE  ME?  READ   THE  WIKIPEDIA  SOURCE
Posted by Unknown at 3:21 PM No comments: Links to this post