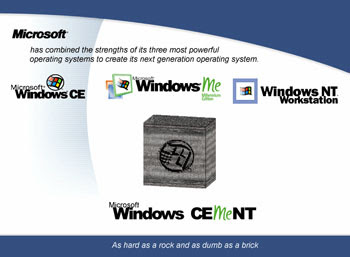 At WehoComputerRepair.com ninety five percent of my clients use Windows including myself. But that will not stop me from complaining about them! Nothing symbolizes Microsoft's tone-deaf approach to it's customers like the history of Windows names.  Now this is the company's main product.  It has earned them billions of dollars globally. You would think that somebody, ANYBODY, could come up with better names for this OS than the ones the company picked.  The worst was called "Windows CE" or "WINCE".  Doesn't that name just make you want to ... well ... wince!???

Here then are the stupid stages of Windows names.

STAGE 2 - GETTING WEIRD - TWO LETTERS
For some reason Windows 4 was not chosen as a name. Instead Microsoft began gluing two letters to the end of the product for no particular reason.  Let the confusion begin!
WINDOWS NT
WINDOWS ME
WINDOWS XP
WINDOWS CE

STAGE 3 - THE BROKENNESS OF VISTA
Not only did Microsoft pick an out of the blue sky oddball name for this release but they also botched the product.  An overly ambitious update, Vista had problems at launch which were finally fixed. But they gave the product a terrible reputation and sales were poor.
WINDOWS VISTA

STAGE 4 - COMMON SENSE - NUMBERS
Suddenly Microsoft got common sense and started naming their products after numbers again. This is probably because 7 is considered a lucky number in English.   But don't expect too much sense making from Redmond.  They totally skipped Windows 9 and went straight to Windows 10.  What happened to 9?  Was it caught molesting children?
WINDOWS 7
WINDOWS 8
WINDOWS 10

This doesn't even take into account that each version of Windows you just read about also comes in four or five flavors of it's own.  This leads to extra-stupid naming conventions like Windows Vista Home Premium Pro Mobile. Erf!  Lots of computer users barely know if they are using Mac or Windows, much less Windows 7 Professional Ultimate Home Mobile.

You can find more good consumer advice for folks in West Hollywood and Beverly Hills at WehoComputerRepair.com. More about THIS issue with Microsoft here at How Microsoft Ignores Own Customers.
Posted by Unknown at 4:43 PM